I recently went to my aunt’s fiftieth birthday party so I took the  opportunity to make some new purchases (one of which is this purple eyeshadow). Anyway, I haven’t done a review in ages so I thought I’d give you all my thoughts on it.

Anyway, this shade is called Purple Heaven so I was expecting it to be a plain purple but it’s actually more of a shimmery-blue-purple-3D-effect colour, if you know what. I mean (which you probably don’t). It doesn’t show up that well swatched as it isn’t a particularly intense colour, as you can see, but it looks nice on the eye. I applied it in a wash and then put a bit more on the outer third of the lid which worked nicely as a highlight thing.

Considering this was £1 from Superdrug, I’d say that it was excellent for the price!

For a long time, I didn’t use moisturiser because I thought that it made my skin get all oily and break out (I have yet to convince my mum that it is not, in fact, absolutely evilest evil evil). If you’ve had a similiar experience, then problem here doesn’t lie in the fact that you’re moisturising, but more likely in that you’re using the wrong thing. Or maybe that your hands are really dirty. It could be either.

Let me start off by saying that I do not believe it is necessary to spend over £20 on a moisturiser. If you want to, then by all means go ahead and do, but it’s not completely necessary. There are perfectly decent ones you can buy for a whole lot cheaper.

Now, a while ago I wrote a review on Simple’s Light Hydrating moisturiser saying it was nice, but it started to break me out so I’m now using Nivea Soft (I should probably change that review). I think the Nivea was about £2.75 for a 75ml tube, and you can get it from Boots or Superdrug, though they probably sell it elsewhere. Nivea isn’t exactly obscure. Anyway, it dies a good job of moisturising my skin if it gets too dry. Often I get dry patches around spots where I apply gel cream, and it works pretty well in them, too. It doesn’t break me out and is basically all round good. Yay!

Well, I’ll see you around, folks. If you’ve bought Nivea Soft as well then I’d love to know what you think.

I don’t feel like reviews are at the top of my list for things to blog about, but, especially after Christmas, I have a lot of things to get down and review! If you noticed the ‘#1’ in the title, then I am indeed planning to do a second set of reviews that will be leaning into the bath/skincare/lip balm category. Or categories. The products I’ll be reviewing are MUA blusher, Witch Anti-Blemish BB Cream, Collection Lasting Perfection Concealer and Rimmel Stay Matte Pressed powder.

Anyway, first up is two MUA blushers in the shades Bon Bon and Cupcake (£1 each).

The packaging looks nice, but it’s not particularly sturdy. Having said that, I dropped one on the floor and it didn’t crack at all. Personally, packaging isnt really a big issue for me unless it’s really bad or it’s really good. I do get tempted by nice packaging.

Bon Bon is a dusky rose shade more suited to medium skin tones (it didn’t suit my pale complexion very well!) but I like layering it with other blush if I’m in the mood. I think I could wear it as a more everyday blush when I’m a bit tanned. Still, it’s a beautiful shade with good pigmentation. The lasting power is okay; if you want it to last a long time then you should use a good primer.

Cupcake is more of a light-pink-brown-jack-of-all-trades shade. It isn’t as dark as Bon Bon, so I use it as an everyday blush. Because of it’s colour, the it doesn’t show up as much (or maybe it just doesn’t have as good pigmentation) so if you’re in a rush and accidentally apply a bit too much it doesn’t look so bad. This shade is more suited to lighter skin tones.

Overall, these are both a great steal at just £1 each: you pick them up in Superdrug or off the MUA website.

This only comes in one shade, which is such a shame. The bottle says it ‘cares for all skin tones’ but it will really only suit those with light-but-not-that-light skin. That’s the specific name, by the way.

The packaging is good; nothing special. This BB cream provides actually quite good coverage for what it is. Although BB creams are meant to be all in one foundations, anyone who has tried (a Western) one knows that they don’t give as good coverage as most foundations. I don’t like to wear foundations that much, so this gave a good amount without looking too cakey. One thing that I have learnt, though, is that you have to beld it in quickly or else you can see the blend marks. I haven’t seen any spectacular results from the Witch Hazel, which is supposed to have anti-blemish properties. I do use a lot of other products, though, and there are so many other factors that it’s hard to tell. On the bright side, this BB cream certainly doesn’t clog my pores or cause any pimples.

The lasting power is nothing more or nothing less than expected; maybe something like 5 or 6 hours before it starts wearing? It’s honestly quite hard to tell.

If you’re willing to overlook the shade problem, which is really the only bad thing about Witch’s BB Cream, then this is a great product for when you want a bit less coverage. I’d buy it again. Witch’s Anti Blemish BB Cream is available from Superdrg for £4.99.

These concealers are well known in the beauty blogging world: Collection (2000) Lasting Perfection Concealer in both Fair & Light (£4.19 each).

You’ve probably heard of these ‘miracle’ concealers. They give great coverage, amazing long-lasting wear and they’re just £4.19 from Superdrug. There are only four shades: Fair, Light, Medium and Deep, so, like me, you may have to buy two and then mix. I feel like Fair would suit very light skin tones, whilst Deep probably isn’t as deep as its name suggests.

A lot of people say that the writing on the tube rubs off easily: I have experienced no such problems, so perhaps they have changed it slightly? They have a doe foot applicator which is fine, though it makes it hard to get the last drips and drabs of product out. This concealer has a fairly thick and heavy formula with medium to full coverage. It’s doesn’t have a yellow or green tone to it which can cancel out dark circles or redness respectively; it’s just ‘skin’ toned. This doesn’t bother me that much, since it’s such a good concealer. I reckon you could use it over larger areas if you needed to, a bit like a foundation (after all, it would only be £8 for a tube of foundation if it came in the usualy foundation amount, 30ml).

I do like this concealer. I don’t feel like it’s a miracle, but it’s certainly great for the price – you can buy it for £4.19 from either Boots or Superdrug.

Finally, I have my first impressions of Rimmel’s Stay Matte Pressed Powder in Peach Glow (£3.99) 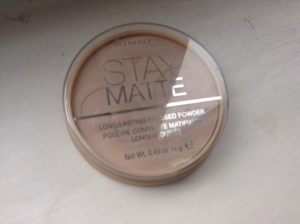 This is another favourite among many people; it gives the 5 hours of matte-ness (well, anti-shine) that the packaging says and all shades except for transucent give some coverage. I tried to swatch it but it didn’t show up, sadly. 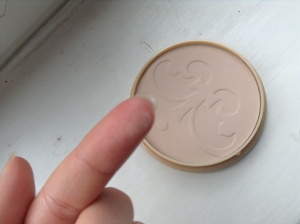 The packaging is okay and feels pretty sturdy. It doesn’t come with any sort of applicator, though they’re usually pretty bad so I’m not particularly bothered. It doesn’t give a lot of coverage but does give a natural matte look for up to 5 hours, depending on how oily your skin is (I have comination skin: an oily t-zone but normal to dry everywhere else). So far, this hasn’t given me any skin problems so I like it. Plus, it comes with a very nice price tag of just £3.99 from either Boots or Superdrug.

Well, that’s it from me, folks! I hope you’ve all got off to a great start in January.

I’m so sorry I haven’t posted in a while – I was ill midweek, which is when I usually write.

Anyway, today I’ll be jotting down my thoughts for the surprisingly good 2True Incredilash Mascara, which was a mere £1.99 from Superdrug.
Ok, let’s get this straight: this mascara is probably not the one you want to use when going out to a party. It’s a day-to-day mascara. Having said that, though, it’s a much better mascara than I expected (I haven’t had particularly good experiences with cheap drugstore mascaras).
The packaging is not particularly attractive; it basically looks a bit cheap and nasty. But I’m actually not that bothered about packaging, to be honest, and this is fine in the bottom of arise or bag. 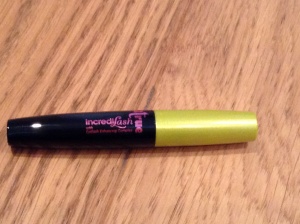 Now, I’m not too sure about this matching up to lash growth serums, but it does seem to naturally lengthen them a little after you have worn it for several days or so. The mascara itself doesn’t give anything special in the lengthening/volumizing department, but it does seem to last a fair few hours without smudging (obviously, within reason).

Because I’m more of a fan of mascaras that give you a ‘I-have-naturally-super-long-black-lashes’ look, I’m not too hard to please. If you’re looking for a very lengthening mascara, you probably want to keep that in mind.

The brush is probably the best thing about this mascara: it’s very easy to apple to both top and bottom lashes, which I sometimes have trouble reaching without getting it on my nose because they are virtually not there! My only problem with it is that it doesn’t seem to pick up a lot of product. I’m not sure if it’s that there isn’t much in the tube to start with, or it’s an actual fault with the brush. 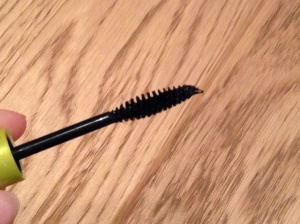 Overall, it’s an excellent mascara for the price! I’m very happy with it. When I bought this, I also picked up NYC Applelicious Lip Balm and Collection Lasting Perfection Concealer (yes, that one), which I’ll do a brief review on soon. I hope you are all enjoying the first week of December!