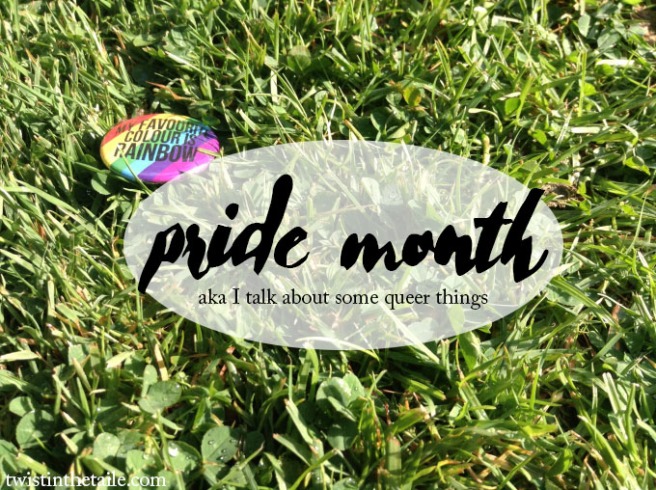 (A note: I use the word queer to describe myself and I’m going to be using it a lot in this post, just to let you know.)

I thought that today it would be nice for me to talk a bit about my own — and I sort of cringe to call it this, but? — ~queer experience~. I know this might feel like a familiar topic, and I am definitely not super unique, but it’s cathartic for me to talk about myself. And who knows? Maybe it will help someone else. 🙂

The internet and by extension the blogging community have both been really formative for me in so many ways. One of these ways is that I essentially discovered that LGBTQ+ people existed and I could be a thing that wasn’t, like, a normative gender or sexuality. I initially thought I was asexual, actually. (And yes, fanfiction introduced me to this. It might sound weird but I think it made a difference to hear it described in terms of feelings?) I didn’t identify with what people around me were saying about crushes and attraction, and to be honest to this day I still don’t. But I’m really grateful to the blogging community for helping me to become more educated, and to discovering myself.

To be honest, I didn’t feel great about my identity for a long time. (I still often don’t.) But simply just talking about queer stuff and how I was feeling really helped me. I’m just looking back on my blog, and I think the first time I started blogging about LGBTQ+ stuff was early 2016? Yeah. In many ways I find it easier to talk to strangers over the internet, and it’s also cool that you can easily find other people who are similar to you.

The first time that I came out to my friends in real life was about a year ago — just after Brexit, actually. Anyway, one of my friends told me they were bisexual and then it turned out a bunch of my other friends were also LGBTQ+ which was cool! I don’t think I officially had, like, a proper coming out moment after that but somehow it’s sort of pervaded our friendship group that many of us are LGBTQ+ which is pretty rad. *finger guns*

I’ve had some people tell me they don’t like it when people put their orientation or identity as their defining feature. I really respect if you don’t want your identity to be a big thing, and of course I’ll try my best to not make a big deal of it! (I mess up sometimes, and I’m sorry.) But I do find it frustrating when people say that I should talk about queer stuff less so I can try and assimilate or something. I know that many people don’t want to talk about their identity a lot but personally I find it pretty stressful to keep everything inside.

Because I am always thinking about queer stuff. It might sound weird, but just being able to talk about it makes me feel so much happier. I know that I have so much privilege — because I’m white, living in the UK, able-bodied, I haven’t really experienced much homophobia or queerphobia — yet it still made me feel isolated to just not be talking about stuff I spent a lot of of time thinking about.

Of course this is something so many people have to do, and I respect you so much. I’m so lucky to be in a place where I actually can talk openly about queer stuff — I can go to a society at school and just chill being queer. And IT FILLS ME WITH SO MUCH INEXPLICABLE JOY. I LOVE TALKING ABOUT QUEER STUFF.

So, yeah, I’m really happy that in the last year or so I’ve been able to be more free with myself, and accept myself. I really hope that I can do that more in the future. One of the things I’d love to do would be to attend a Pride celebration! The nearest one to me is London, and currently I am planning on going, which I’m pretty excited about.  (If you’re thinking of going then and want to say hi then I’d love to hear. *nods*) I do hope that I can, and that I can be more happy with myself in the future, even if it isn’t always easy.

5 thoughts on “Pride Month // i talk about queer things”

Leave a Reply to Eve @ Twist in the Taile Cancel reply