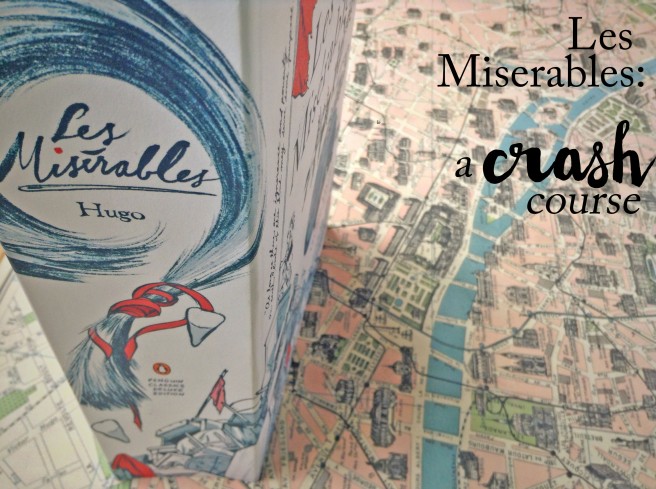 This April marked two years since I fell down the rabbit hole of Les Miserables, and by extension many other musicals. TWO YEARS. It feels like a long time ago. I’ve changed a lot since then. Les Mis became, and still is, a really important part of my life!

Thus, to mark the occasion I bring you my guide to Les Mis, for people who know nothing about Les Mis. I am currently listening to the musical and I am READY FOR THIS.

Les Mis refers to the book Les Miserables by Victor Hugo, covering a failed revolution and a reformed convict in 19th-century Paris, and its subsequent adaptations, most notably the Broadway/West End musical.

Our journey begins with the novel Les Misérables-with-the-e-acute novel by French author Victor Hugo, published in 1862. The main characters are:

It’s a pretty long book, but I do think if you love Les Mis then it’s worth it! Lots of people call it The Brick due to…well, its very brick-like nature as a book. (That is to say, it’s very long.) Other things you might need to know are the Infamous Waterloo Section, which is an essentially an essay about Waterloo,  and the time that Valjean broke out of a convent in a grave. There are many different translations, ranging from modern (Donougher, ose) to old-timey but free (Hapgood). You can even do a Les Mis tour of Paris in which you visit the original sites. DON’T WORRY, I’M COMING TO THE STUDENTS.

Yeah, I’m giving them a separate section because I LOVE THESE KIDS. The main things you need to know are that they have an extremely minimal/sometimes even non-existent part in the musical and…still quite a comparatively small part in the book. HOWEVER THEY ARE VERY IMPORTANT SYMBOLICALLY. (Or so I hear.)

Anyway. They all like jokes, and their name is a French pun (for l’abaisse which is apparently like the abased/degraded, thanks internet). They have so many French puns. I don’t even understand them most of the time. From the sometimes few information Victor Hugo gives us, the fandom has sort of interpreted personalities, which somehow absorb into one’s brain through Collective Fandom Knowledge, which is pretty epic.

Excuse me whilst I feel a bit emotional here. This hasn’t included Eponine, Gavroche, and Cosette, who I sometimes group with them just for ease even if they’re not technically of the ABC, but OH WELL. MY KIDS. ;-; And just for good measure, here is an amusing post of “Les Amis as stuff the students living next door to me have done”.

This is probably the more well-known and accessible form of Les Mis. It’s a very popular sung-through musical now, but when it was released the critics were like OMG NO IT’S TOO SAPPY AND TRAGIC. I Dreamed a Dream and Do You Hear the People Sing? are among the best-known songs. The Confrontation, a duet between Valjean and Javert, is also very much a jam in my personal opinion. However, the musical does cut a lot of the book, in particular Les Amis, the details of Valjean’s life and Cosette being an absolute badass.

Some things you should know about various different forms and productions:

Last year the BBC announced they were making a (non-musical) Les Mis miniseries, written by Andrew Davies, and in February this year he stated that he had just finished writing the first draft. It’s due to air next year, and for one I am very interested to see what it comes up with! I even wrote about the stuff I’d love to see them put in if you want to check it out. 😉 Other Les Mis-related content of mine includes a Jehan cosplay tutorial, Les Mis v Hamilton fandom battle, and the Les Mis book tag.

There are, of course, many other adaptations, including several movies, radio plays, and TV series, and it’s very easy to fall into the hole of internet searching. As you can perhaps see by my myriad of links and 1.5k post on this topic. (Me, a Les Mis fan? I mean, maybe a bit.)

do you like musicals? what do you think about les mis? is there a particular fandom which is important to you?

Leave a Reply to Eve @ Twist in the Taile Cancel reply