You may have noticed that my monthly favourites just sort of…disappeared from the blog. I know it didn’t have much of an explanation. BUT! Although it might sound hard to believe (I mean, this is me) I actually did have a master plan. 😛 From now on I’m going to be doing round-ups every three months — that is, quarterly. Except it’s going to run from December – February, March – May etc. because seasons and cohesion. Yeah. DON’T ASK. Doing a round-up every month was just becoming a bit of a chore for me, but I still wanted to be able to check in and share the great posts I’ve been reading. Hopefully I’ll start being more organised with keeping track of posts haha! 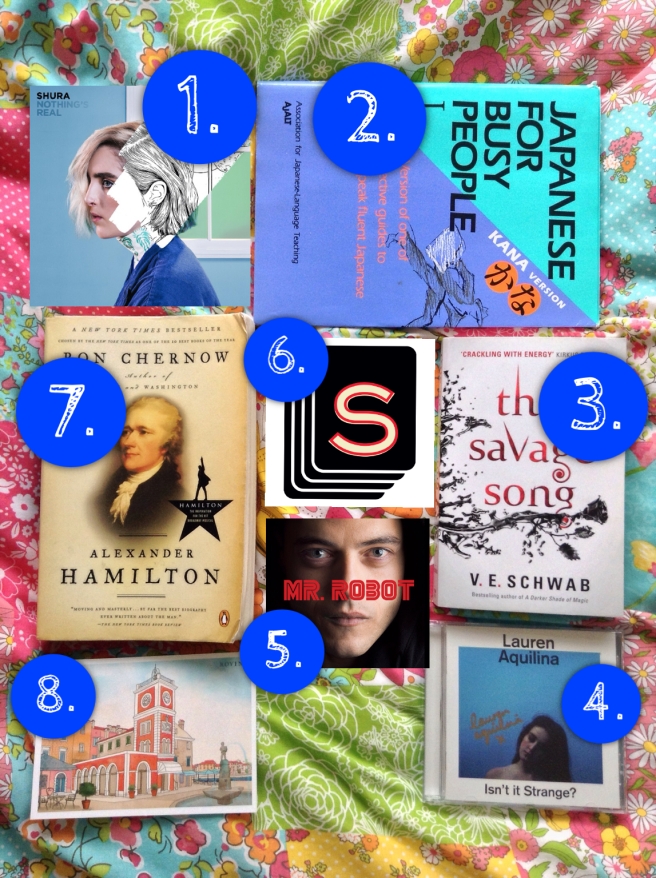 1. Nothing’s Real by Shura YAY, I have listening to a bunch of great queer music lately! I first came across Shura when I found her video What’s It Gonna Be? on Tumblr, which to be honest STILL makes me sigh in happiness. It is so wonderful and cute and excellently aesthetic and you all need to click on that link right now…(No, seriously: KEEP WATCHING TO THE END. It’s fab.) Anyway, I bought her full album and it’s awesome and now I might have a tiny crush…? Erm. Anyway.

2. Japanese Woah, guys. I ACTUALLY LEARNT SOME JAPANESE. (I’m attempting to learn some for my trip next year.) I feel so proud of myself. I’ve only done the first few lessons in my textbook (an old edition of Japanese For Busy People) and a bit of a Memrise but I feel very productive. I’ve also signed up to an online course on Minato, so let’s see how that goes.

3. This Savage Song by VE Schwab Let’s be real: it’s a Schwab book. It was always going to end up in my favourites. The writing was beautiful as I per usual and I adored all of the characters! It was also completely awesome to be able to go to one of her events, asdfjkl. (In a subtle bit of self-promotion: here! check out the post where I wrote about it! :P)

4. Isn’t It Strange? by Lauren Aquilina *shrieks* A NEW LOZZA AQ FULL LENGTH ALBUM, WHAT IS LIIIFE. I’ve listened to it in full about 3 times already and…honestly. I think my life is complete. IT’S SO BEAUTIFUL. Expect more flailing in the future. 😉

5. Mr Robot Another programme I finally got round to watching. I find it a bit intense and occasionally a bit of a downer, but it’s a seriously awesome programme. I have 2 episodes left of the first series to watch. (Yes. I know. I watch TV programmes pretty rarely and if I do it’s with the pace of a snail. This is impressive for me.)

6. Serial I downloaded this podcast to my ancient iPod some time ago, but I only recently got round to listening to it. And woah, it’s so gripping! I’d definitely recommend it.

7. Alexander Hamilton  by Ron Chernow I am very proud of myself for finishing this brick of a book. It evens rivals The Brick (aka Les Mis) for historical density. Despite its length, though, I actually found it super readable! And…well. My Hamilton obsession is only increasing, to be honest. I’d recommend it to anyone with an interest in the American Revolution! (Because history actually is as crazy as the musical.)

8. Slovenia and Croatia So, my big trip this summer was travelling with Guides around Slovenia and Croatia! I’d been fundraising and working together with 13 other girls from my area for just under a year and the trip was absolutely AMAZING. I mean…Girlguides is a little weird for me, because obviously everyone assumes you’re a girl. But it was so nice and asadfjkl I AM FILLED WITH JOY FOR GUIDING & SCOUTING. If you guys ever get the chance to go on an international trip with a scouting organisation I’d definitely recommend it! ❤

stuff from around the internet: 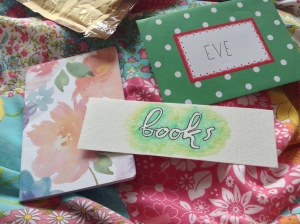 I hope you all had a good summer! And if any of you guys got your exam results back then congrats, and I hope you’re pleased.

how was your summer? are you back at school (or not)? listened to any good music lately?