From the number of favourites this month it looks like my April has been a bit dismal. BUT IT REALLY HASN’T BEEN. The things that have happened are just more interesting, and also I wrote more about them. Although I’ve been rather stressed out with the combination of Camp NaNo, music exam, and revision, so. Maybe my ability to be excited was eaten away by stress…? Wow, that also sounds dismal. LET’S MOVE ON. 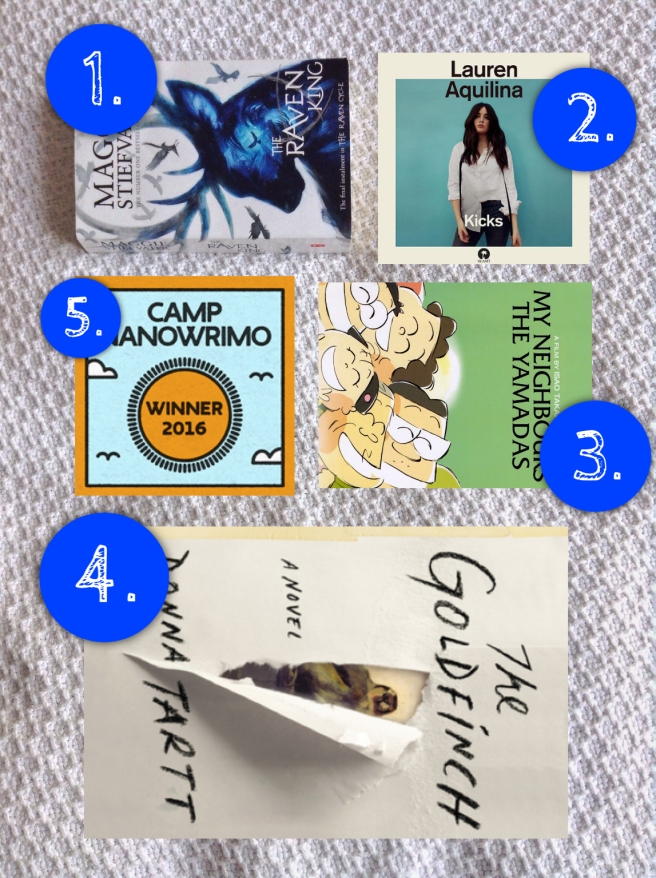 1. The Raven King by Maggie Stiefvater Well, duh. This was one of my most anticipated books of this year. And I adore The Raven Cycle. I thought that maybe in terms of story it was a little messy? Like, there were a lot of new things that seemed to appear out of nowhere. But overall I’m SO HAPPY with how the series has ended and ASDFJKL AMAZINGNESS. *flails* I’m really not ready to leave these characters. I need something to help my emotions here.

2. Kicks by Lauren Aquilina First of all: NEW AQUILINA MUSIC!! Second of all: AWESOME UPBEAT CATCHY NEW AQUILINA MUSIC!! Kicks is just a really fabulous song. Lauren’s sort of moving into more pop-electronic kind of things, but I’m loving it if it’s like Kicks. (I’ve also been writing an excellent co-review of New Aquilina songs, so be watching out for that.)

3. My Neighbours the Yamadas Another Studio Ghibli movie night in the quest to watch them all. Me & my friends have a super fun group where we all watch Ghibli movies together, and we were kinda expecting this one to not be so good…? It has a very different experimental art style, and it’s a series of short stories about a family instead of some crazy whimsical film. But it was HILARIOUS. I highly recommend!

4. The Goldfinch by Donna Tartt I haven’t read many books this month because I spent absolutely forever on this. It’s a complete brick of a book. And I actually enjoyed it so much! It was cool to read it right after my New York trip. It dragged in places, but the writing was beautiful. And also it was slightly awful to watch the train wreck happening, but beautifully awful.

5. Camp NaNoWriMo I HAVE LITERALLY JUST COME FROM FINISHING THIS. 10 words over my goal yess. I mean, I was only doing 15k this time — I started out pretty strong, but very soon realised that maybe it wasn’t a great idea to do Camp NaNo right before exam season? *laughs manically* Normally it would be more aligned with my school holidays, but Easter was really early and it sort of messed my plans up. ANYWAYS. I’m a bit frazzled now, but I’m pretty proud of my WIP so far & I’m looking forward to talking more about it in the near future! (Meanwhile you can check out my Camp playlist here.)

Stuff from around the internet:

It really pains me to say this, because I’ve been a bit missing in action over the last month as well, but: I’m not going to be as active on my blog until mid-June, which is when my exams finished. I’ll still be posting and chatting to you all, but I don’t want to put more stress on myself! So, yeah.

how’s your april been? got any upcoming cons? (not the heist kind, the other one.) have you been having crazy weather like me?!