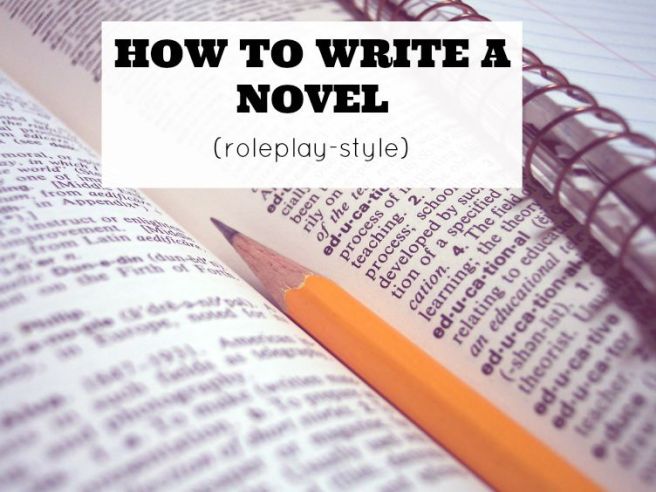 I used to spend a lot of time on adoptables sites. I do mean a lot. *coughs* 87% of that time was spent on fairly useless things like dressing up strange creatures in bowler hats and part streamers, but I also did a lot of roleplay. Right now I’m really realising that ROLEPLAY WAS ALMOST LIKE WRITING A BOOK, look!

It’s quite possible none of you have an inkling of what I’m talking about? I’m not sure if RPs are a A Thing That People Know About, because many random forum culture things are obsolete everywhere else on the internet. To give you a refresher: it is roleplay! So, you write a super super short snippet from your character’s POV, and then other people do the same. It’s like a book with very swift narrative changes. So, here is how to write a novel. As if you’re writing a roleplay.

This needs to happen at the end too, but first you need to PITCH IT TO YOURSELF. It can be an idea-selling sandwich. (Channel your inner The Apprentice contestant. Play that part from Romeo and Juliet as you write. It should scare you sufficiently.) Make yourself excited about this world, because if you’re not excited then everyone else is much less likely to be.

Pitching an RP is probably the most important job of the creator. You’ve got to make the premise sound as intriguing as possible – and inform people of your setting – whilst still leaving things open for people to be creative. RPs are a literal gold mine for writing ideas. (GUYS, DON’T BECOME THIEVES BECAUSE I WROTE THAT. Stealing ideas = nope. But, you know, there are so many amazing creations. *swoons*) You’ve got to learn to sell, because otherwise your idea is going to sink like a stone weighted with the miseries of life. And you will probably be sad. And then Alan Sugar will fire you.

Yes, go and fill out that form! Pay attention to the carefully constructed flaws box. Make sure that your book is not filled with a clone army of The Mysterious One Who Is Snarky And Mistrustful Until You Get To Know Them And Then Is Fiercely Loyal (And Also Has Green Eyes.) I’m still scarred from the last clone army I saw.

Okay, whilst a roleplay form can often feel all too much like a formula, it did help me get to know my characters. I threw random personality traits at it and went with whatever stuck. I mean, my old characters weren’t great – heartless manipulative characters are just too fun to write, okay? – but now I know the feeling of understanding a character. The ‘eureka!’ moment, if you will. 😉 Roleplay forms are also a super good way to tell how fan-edit-able your character is, because theme songs and pretty graphics are key.

Learning how to set up a conflict in two paragraphs when you can only control one character would have been a great skill. Had I mastered it. Alas, it wasn’t meant to be, but conflict is so important – an RP isn’t fun without it; neither is a book. If all else fails, start up a random argument or a dramatic chase scene! Because I’ve obviously never had to resort to that before. *coughs* If you didn’t set up a conflict when you pitched your idea, then I recommend now. Or some time in the near future.

I think that writing as if you’re in an RP can be pretty useful, because it’s more of a chess game of characters. You’re not allowed to control anyone else so your character has to do stuff themselves. Static objects are not allowed. Characters just can’t spend every post having things done to them because.

It’s not good for the whole time. Things will need to happen to your characters, and also you probably don’t want to spend the entire time pretending to haggle with your alter ego over what those things should be. But: it will make you consider whether your protagonist is an actual protagonist or just, you know, a piece of cheese. With green eyes.

Have any of you roleplayed before? Would you ever have a go? How similar do you think RPs are to other forms of writing?

8 thoughts on “How To Write a Novel, Roleplay-style”