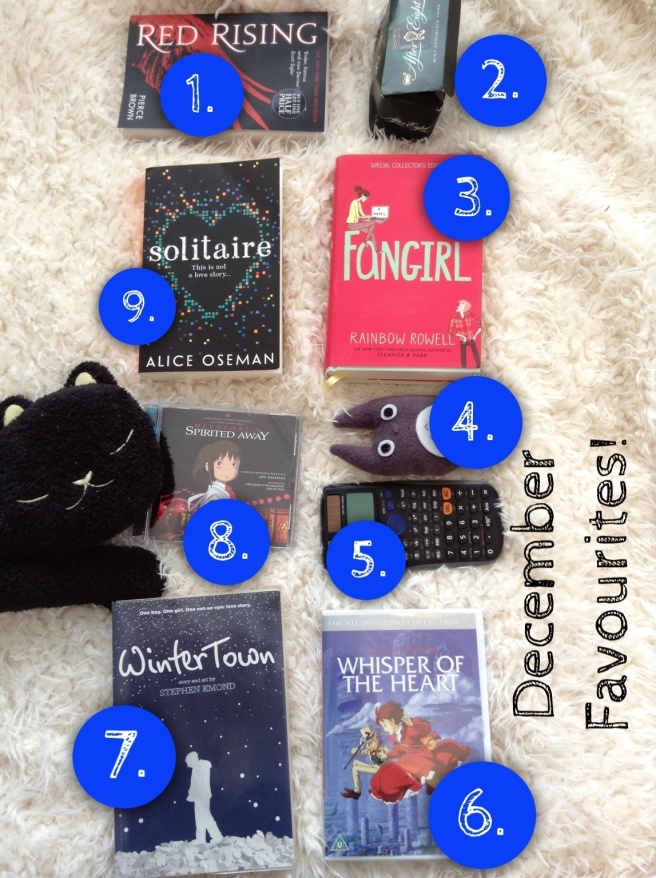 Yup, it’s that time again! This month I’ve got a bumper crop. My cat pillow somehow snuck in the picture there too.

1. Red Rising by Pierce Brown Post-book high? Nah, I don’t think so. Okay, maybe. But I bought this from Waterstones a few days ago (hence the half price sticker) and OH MY GOSH IT WAS AWESOME.

It fixed almost everything wrong with The Maze Runner: bad writing style, bad romance (*cue music*), bad world-building. Darrow was kind of a Gary Stu, but I’m a sucker for the underdogs who have to keep their secret. (Think Throne of Glass, Curse Workers, Merlin.) (Gosh, I’ve used so many brackets already and we’ve only got to one out of nine.)

2. After Eights I love these things. You know, the mint thins? Yeah, those. I don’t understand people who don’t like mint chocolate.

3. Fangirl by Rainbow Rowell Am I ever going to get over this book? Probably not. At least, not in the near future. But it’s CARRY ON SIMON GUYS IT’S COMING! (I discovered this in the dressing room at the Royal Albert Hall. Torture ensued.) I’m re-reading it in celebration of the news

4. Totoro plushie As given to me be a friend, because they sold these at our school fair. (!!) I love my little Totoro so much ❤

5. Belphegor’s Prime If you missed my flailing over this beautiful number then I’ll tell you again: THAT IS ONE AWESOME BIT OF MATHS.

6. Whisper of the Heart I have a long-standing love affair with Studio Ghibli movies, and this one is no exception. It’s basically the story of my life – introverted reader with no fashion sense secretly writes a book – except that I’m not in love, obviously. But I like the romance, all the same. It’s not because Shizuku is pretty; she has the same conventional hairstyle and clothes as half the other girls in her class. It’s because of who she is. And it includes the Baron, inspiration for the later film The Cat Returns and all-round badass statue.

7. Winter Town by Stephen Emond This is one cute ball of fluff, I’m telling you, though it has some serious elements too. Again, I could really relate to the main character – STORY OF MY LIFE – and the comics were an awesome touch.

8. The Spirited Away soundtrack I don’t know how I managed to fall in love with a soundtrack, but I did. This is the time when I wish I’d kept at the piano, because I’m finding Chihiro’s Waltz atrociously hard to play. My favourite track of all is probably The Dragon Boy, because Haku. And brass. I just really like brass in music, okay?

9. Solitaire by Alice Oseman I wasn’t sure if I’d enjoy this, but I did. For some reason, I thought Michael Holden was going to be the pretentious idiot who introduced Tori to Solitaire, but he wasn’t. He was awesome. My main qualm was that it was over too quick. 😦 I think need to read more slowly. (Plus, go teen writers!)

I’ve also got Holiday Bookish Bingo to round up, it seems! It’s hosted by Great Imaginations, and the next round is available for sign-ups if you’re interested. (I already have.) You may notice that my green ticks are rather few and far-between this time compared to the other months, and that#’s because…well…I kind of forgot about it. Oops.

But the books I read that managed to fit the terms this month were:

Creature on cover: Sisters Red by Jackson Pierce. The cover was beautiful, but the book was a bit eh.
Set on Halloween: Unrest by Michelle Harrison
Mystery: Cuckoo Song by Francis Hardinge. Is this mystery? I don’t know. A lot of books have mystery in them. Maybe Messenger of Fear by Michael Grant would have been a better choice, but it was a worse book so #WHATEVER I’M A REBEL

And that, my friends, concludes my little December round-up. Now, if you’ll excuse me, I have The Bane Chronicles to begin reading…