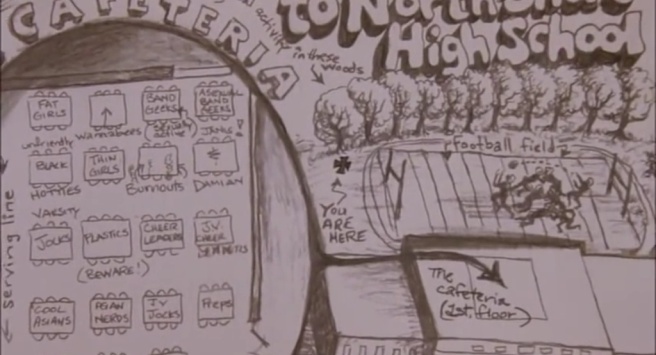 You know that moment in Mean Girls where Cady goes into the cafeteria and gets a guided tour of all the cafeteria ‘tribes’ or ‘cliques’? Well, school isn’t like that.

Granted, I don’t a) live in the USA, b) go to high school or c) go to the British equivalent of high school (I think), but school is not like that. Especially in the cafeteria, where everyone pretty much sits wherever they want.

As far as I can see, school is vaguely split up into three types of people:

Obviously, it’s not all black and white and people have varying degrees of opinion, but that’s basically the three camps.

On the subject of Mean Girls, a lot of girls who consider themselves to be popular are basically the plastics,  but younger and not really going out to parties. Otherwise, they’re very similar. I hope to laugh at them someday in thirty years’ time and tell them “You were idiots when you were at school.” I probably won’t, but hey. It was worth a shot.

I’m sorry for this rant, especially if I’ve offended you by it, but I needed to put this out there. It was driving me slightly crazy.