Finally! The second instalment in my drugstore reviews! 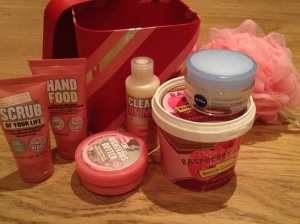 This one is on skincare, bath stuff and basically everything I didn’t cover in the first one. Although some of the stuff  featured are not in fact drugstore, they’re still quite cheap so I decided to include them anyway.

And, although this is not particularly related, PRIMARK LIPGLOSS HAS GONE UPMARKET! It now has a sort of brush applicator, like the one I have seen only in pictures of YSL Touché Éclat. Unfortunately, the product is still basically just glitter but I still think that brush is pretty cool. Anyhow:

The first item up for review is Nivea Express Hydration Primer.

I can’t really confirm its priming powers other than that it does help makeup and such to last longer, which is of course good! I sometimes get powder sticking to my chin in dry bits, for some odd reason, and I can say that this sorts that out. It has a gel-like texture and spreads easily so you don’t need that much to cover your face. It doesn’t do bad at moisturising your skin, either, but I don’t think it would help that much if you have dry skin. Overall a good, all-round product, like you often get from Nivea. 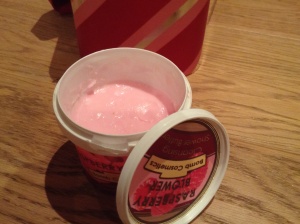 This stuff smells amazing. It makes my bathroom smell of raspberries. I love it.
This shower-butter-thing is semi solid in the pot, and what you do is scoop some up with your fingers and lather it onto your body. The result is very creamy, and very smooth. This product is a ‘very’ product, apart from the slightly tacky packaging. It doesn’t bother me a lot, though. In some respects, it adds to the novelty. It is £7.99 from the website.

Now for the Soap and Glory Bright and Bubbly gift set. It contains the Scrub of your Life, Hand Food hand cream, The Righteous Butter and Clean On Me shower gel. I got it for £5 from Boots on a deal, but it’s normally £10.

The Scrub of your Life: let me start by saying that I haven’t had a lot of experience with scrubs. This was, in fact, my second. I like it, and it smells good, and I think it scrubs well. The beads are fairly big, but not rough. As always with Soap and Glory, the packaging is cute and looks great.

Hand Food. A lot of people rave about the Soap and Glory smell, but I didn’t like it at first. I found it too strong and synthetic, but I actually quite like it now. Still, it might not be for everyone. You may want to smell it in the shop. The actual hand cream itself  is thick and creamy, but it sinks in quickly. I don’t have particularly dry hands but it is definitely working.

The Righteous Butter is a creamy body butter – it’s easier to ‘break’ into than the Body Shop’s Body Butter if you’ve ever used that. I can’t say it’s done wonders, but it isn’t bad. I haven’t really used it that much, to be honest.

The last is Clean On Me shower gel. It’s basically a sweet-smelling shower gel. You can’t really do much with shower gels to be honest. Still, it’s good for taking on holiday.

And that completes this part of my big drug store review. Until I buy more stuff, and then review that.

But, right now, I will say farewell. I just had a week’s holiday, so if you did too then I hope it was relaxing! If not, then we are coming into MARCH which means SPRING and NOT SO DARK AFTERNOONS! Yay!!